The Legend of Zelda ROM 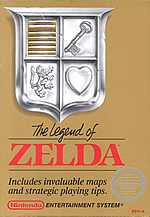 Yes, this is where it all began. This is where our green-outfitted friend made his first appearance in the gaming world. This game went down in history by selling over a million copies and was known as the most challenging game of the era.

The Legend of Zelda came complete with an instruction manual that contained a lot of useful information such as map and guides on how to beat the game. All the elements that we love from the Legend of Zelda can be found here in its earliest form, puzzle-solving, adventure, action and role-playing. In the game, Link move’s out in the world in an overhead view in a quest to recover fragments of the Triforce

that has been scattered throughout Hyrule by Princess Zelda and defeat Ganon, Prince of Darkness. As primitive as it was, The Legend of Zelda was still a favorite of many and was declared as one of the most defining games in the history of gaming.

The Legend of Zelda offered many innovations in gaming and one of the most famous is its ability to save the game. Considering this was a NES game, that feature was a huge step and an important one because you are most likely unable to finish the entire game all at once. Because of its great accomplishments, The Legend of Zelda was re-released a couple of times for gamers of the new generation to experience the roots of their favorite Legend of Zelda series.