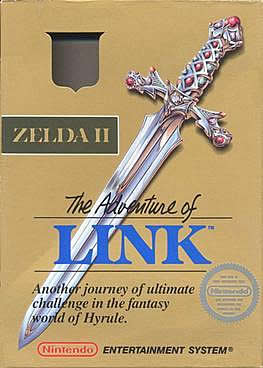 The game takes place four years after The Legend of Zelda and in this time, even with Ganon defeated, his followers still remain at large. When Link turned 16, a mark appeared on the back of his hand so he goes to Impa to ask about it. When Link makes his visit, he finds out that a curse has been cast of Princess Zelda putting her in a deep sleep and the only way to wake her is to use the Triforce. But since the Triforce of courage is hidden, Link embarks on a journey to find it.

The Adventure of Link looks quite similar to the original, but it does come with a lot of new features that made it truly unique at that time. Examples of these are the Experience point system, interaction with NPCs, and magic spells. By defeating enemies, Link can gain Exp points to raise his attack, magic, or stamina. Learning magic spells is accomplished by talking to a Wise Man in town, who will give you an objective to finish before teaching you a spell.

Although many say they did not enjoy The Adventure of Link as much as they did with the original, it is undeniable that this title also set a lot of standards in the gaming world and is one of the most unique games of its time and a lot of its features were carried on to future Legend of Zelda releases.