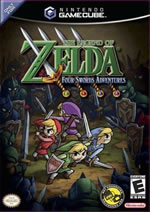 Taking its roots from the original Four Swords, this title focuses on bringing a multiplayer Legend of Zelda title for the Gamecube. Within Four Swords Adventure are two different forms of gameplay.

The first mode is the Hyrulean Adventure and the story part of the game. It can be played by up to four players in a cooperative battle to beat the game. The story is about villain Vaati living in Hyrule. Vaati is an evil sorcerer that could command wind and caused chaos throughout Hyrule. It is said that a boy with a magical sword managed in defeating Vaati, and sealed him inside his sword. A shrine was then built to house the sword and ensure that the evil sorcerer does not roam free again.

These are the events of the past, and at present Princess Zelda is now in charge of guarding the shrine. One night, Princess Zelda calls upon Link to accompany her to check on the sword. As they enter a shrine an evil figure came to them, this was Shadow Link. Causing trouble, Link was forced to wield the Four Sword, giving him the power to split into four copies of himself, but at the same time releasing Vaati. So the adventure begins as the four Links set out to uncover the roots of the trouble now set upon their land. The gameplay is similar to the Legend of Zelda title for the Gameboy Advance, Four Swords, and even the graphics look quite similar.

The second mode is the Shadow Battle. This is a multiplayer mode where instead of helping one another, you fight until only 1 is left standing. Shadow Battle requires at least 2 players to play the match and face off against each other.

The Japanese version of Four Swords Adventure actually included a different mode named Navi Trackers where the objective was to find pirates from Tetra’s crew and collect stamps as you go. The Four Swords Adventure is a great experience for any gamer and a break for Legend of Zelda fans from all the solo play.