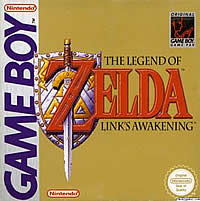 Link’s Awakening is the first Legend of Zelda for the Gameboy and was released in 1993. It was re-released some time later in the Gameboy color to add some color and appeal to the game and also contains an extra level to explore.

Something new about this title is that it does not start in Hyrule, but instead it starts in Koholint Island, where Link drifts away to when his boat was destroyed by a storm at sea. Link awakens and is found by a girl named Marin and is taken to their house. After finding his sword on the beaches, a mysterious owl flies up to Link and speaks to him telling him that he must awaken the Wind Fish, the guardian of Koholint, and is located in a giant egg in the middle of the island if he ever wishes to go home. Link now sets off to find the Eight Instruments of the Siren that is needed to awaken the great guardian.

Link’s Awakening plays pretty much like the previous titles but the main focus here is the exploration of the island. The game contains a lot of side-quest to make the game more interesting and rewarding. A funny feature included here is that Link is able to steal from shops but he will be known as a thief and if he enters the same shop again he will be killed. This game really has a lot of new features added in to make sure you get quite an experience like fishing, learning special songs, and others.

Being a game for the original Gameboy, Link’s Awakening is huge. Containing a lot of things to do, enemies to fight, areas to explore, and puzzles to solve, this game has accomplished a pretty impressive feat and is sure to be one of the great games for the Gameboy.