The Legend of Zelda: The Minish Cap ROM 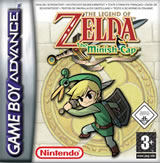 The story begins in a festival in Hyrule to honor the Picori, also known as the minish, a tiny race which was said to have helped Hyrule at a desperate time a long, long time ago. According to legend, the Picori came down from the skies and bestowed a sword to the human race and a golden light to be used to restore order to the world. Of course, most people thought that this was just an old fairy tale.

During the festival, a stranger named Vaati appears and curses Princess Zelda turning her into stone at the same time Vaati breaks the legendary sword the Picori gave the humans. Finding out that the Picori truly exist and they appear only to children, the King of Hyrule appoints Link into finding Picori to restore the broken sword and break the curse of the princess.

As Link goes on his journey, he comes across a strange hat that has a bird-looking head on it and it talks. The hat’s name is Ezlo and he gives Link the ability to shrink down to minish size and also gives Link advice from time to time. As Link finds the Picori people, he uncovers a dark truth and learns that Picori are in grave danger. So Link sets out once again, this time, not only for his own world, but for the world of the minish also.

The Legend of Zelda: The Minish Cap has really made a great impression as one of the first on the Game Boy Advance and is considered as one of the greatest games for this handheld console.