The Legend of Zelda: Oracle of Ages ROM 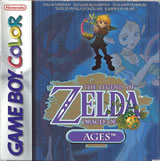 The Oracle of Ages is the sister title of the Oracle of Seasons released for the Game Boy Color. Both Titles were released together and both start out the same way with the Triforce calling out to Link. This time Link is transported to a land called Labrynna, where he finds Impa, Princess Zelda’s nurse, in trouble with monsters. Link rushes in and the monsters leave. Impa pleads Link to find a singer named Nayru. What Link doesn’t know is that the real identity of Nayru is the Oracle of Ages, and this whole plot was engineered by an evil Sorceress, Veran, who wants to capture Nayru and use her power to control time to carry out her evil scheme of traveling to the past to change the present.