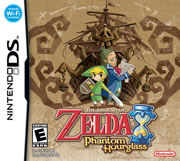 Phantom Hourglass still makes use of the bright cel-shaded graphics used in The Wind Waker and the story immediately starts off where it left, where Link takes off together with Tetra in a pirate ship in search of new land. The Phantom Hourglass story begins as Link and Tetra venture out into the ocean that is protected by the Ocean King.

At the same time, rumors say that a mysterious Ghost Ship roams the waters which, later on, are seen by our heroes. Tetra does not believe in such stories about the haunted ship and move toward it to check it out. Tetra goes on board the Ghost Ship, but the ship suddenly starts to move away. Link tries to jump aboard the Ghost Ship as well but fails and falls into the ocean, loses consciousness, and drifts away.

When Link regains consciousness he finds himself washed up on the shore of an island and finds out he lost his sword. Later, Link meets two companions, a fairy named Ciela and Captain Lineback who joins him in his search for the mysterious Ghost Ship to rescue Tetra, and so begins another adventure.

Phantom Hourglass is definitely a step-up from previous titles, and relies heavily on stylus inputs. You can draw lines as a path for Link to follow, tapping or slashing at enemies makes Link attack them. Tapping icons lets you access menus with different functionalities such as equipping items. Stealth is now an important factor in finishing dungeons as some enemies are notably hard to kill, and along with puzzles and obstacles, phantom hourglass one exciting experience. If you have played Wind Waker, you will find out that the concept of sailing and exploring different islands is still in play and is a major part of the gameplay as you need to brave the seas to find important items and exploring certain locations.