The Legend of Zelda: The Wind Waker ROM 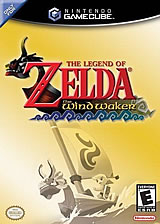 The Legend of Zelda: The Wind Waker follows its previous title, Ocarina of Time and Majora’s Mask, by retaining some of its gameplay mechanics. But what is most surprising about this new title is its graphics. This title takes on a new look with cel-shaded graphics, and designs that made Link, and the rest of the environment cartoon-ish.

Another thing new about the Wind Waker is that it does not start out in the Kingdom of Hyrule, unlike the other games. Link starts out this time on an island with a vast sea to explore, and below the sea lies the ruins of the once great Kingdom of Hyrule.

The story focuses on sailing across the world to different islands by means of a baton that can control wind called the Wind Waker. Link ventures to gain hold of a relic know as the Triforce and defeat his enemy, Ganondorf. The story begins as Link rescues a girl named Tetra, leader of a group of pirates, from a giant bird. The bird comes back to take Tetra but takes Link’s sister by mistake. Link now boards Tetra’s pirate ship to go in pursuit.

Controls of the Wind Waker is still the same as the Ocarina of Time where Link can run, walk, attack, defend, and still retains the feature to lock-on to enemies to attack. A new feature in Wind Waker is the ability to parry an attack. While locking-on to a target and not defending, the game sends a cue that the enemy is about to attack by vibrating the controller and sounding a chime. By attacking during this time, link is able to evade or parry the enemy attack and counter attack. This tactic becomes a crucial part in combat as some enemies cannot be brought down by fighting head on but by striking from behind and this applies to some bosses too. Also another feature in Wind Waker is along with the weapons Link normally uses, a sword, shield, boomerang, grappling hook, and others, Link is now able to pick up items from his defeated foes and use them.

Following an epic storyline, The Wind Waker is a great game and Nintendo had a treat for those who pre-ordered the game by including the Ocarina of Time and Ocarina of Time: Master Quest with the pack. This was such an appeal to fans that 560,000 copies of the game were pre-ordered, gaining a Guinness World Record.

Welcome to the home of Zelda ROMs Download games and emulators from ZELDA series. Zelda Emulator